The Farm Security Administration (FSA), played a big part in the creation of the Okie legend. Art Historian Cara Finnegan says that “Many in the early years of the twentieth century did not believe that rural poverty existed.”[1] The long revered Jeffersonian agrarian ideal centered on the belief that farmers were the salt of the earth; these noble and hardworking people were the backbone of America. This view conflicted with the belief of many Americans that poverty was a moral flaw, “a sickness freely chosen through laziness, drinking, extravagance and sexual vices,” an idea that had taken on racial connotations, particularly after Reconstruction.[2] This set of ideas complicated the work of government relief agencies, which were also struggling against the idea of charity as a socialist ideology that would weaken the American people by making them addicted to the dole.[3] To bring public support to the plight of the rural poor, FSA photographers were given instructions on the content and subjects they were to capture. Black migrants were often deliberately overlooked by photographers because the head of the FSA was interested in promoting the vision of “deserving” poor, and for many in America that didn’t include minorities.[4] This effectively removed black migrants from the Okie migration. These photographs stand as the iconography of the Great Depression. Despite the reality that only 36 percent of those who migrated to California had been living on farms immediately before their relocation, “The Grapes of Wrath narrative—the “Okie” family that leaves the worn-out dust choked farm to find better life in California—nevertheless came to symbolize the Depression experience of rural Americans, and it continues to dominate our public memory of the Depression today.”[5]  The conditions that gave rise to the term Okie for the white migrants who moved out of these states and headed for new opportunities around the country, were the same as those faced by blacks in the same areas. African Americans lost businesses, farms, and jobs just as their white neighbors did, and they struggled to provide the necessities of life for their families, just as whites did, and they looked to the same solutions. African Americans faced further pressure as whites sought to disenfranchise black voters, undermine black schools, and hamper relief efforts aimed at black workers and families. The term Okie that has become a term of pride or endearment for many, has become embedded in American collective memory as exclusively white. Continuing to racialize the term Okie prevents African Americans from being able to wear this badge of folk honor. Like so many movements and events in American history, blacks have traveled, worked, and struggled alongside whites to build this nation, and like so many of these movements their collective contribution has been overlooked. African Americans had an even steeper hill to climb out of the disastrous economic downturn, as Jim Crow laws, and New Deal government policies intentionally hampered their ability to better their lives. When against the odds, they survived, or even managed to thrive through adversity African Americans were not afforded the place in history their white neighbors were. 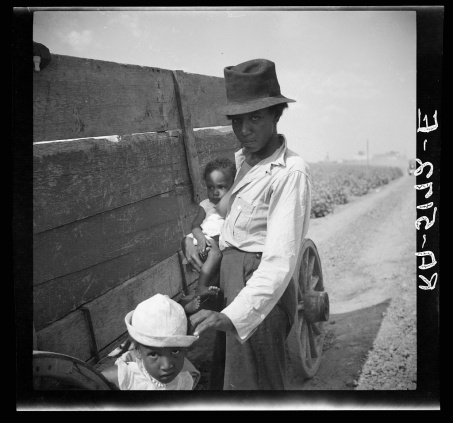 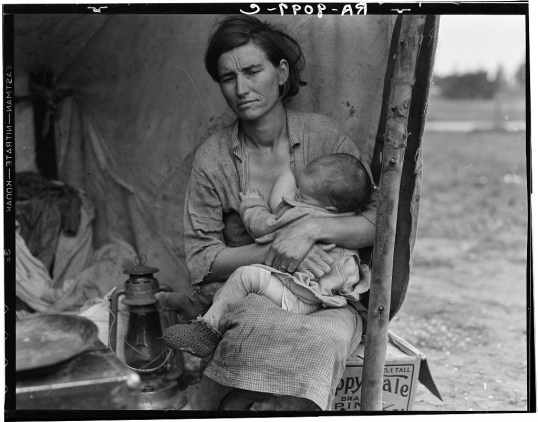 I want these images to be prioritized in the same way. One image should not be published and the other ignored any longer. Both of these mothers struggled for their children in much the same ways. Both are American women.